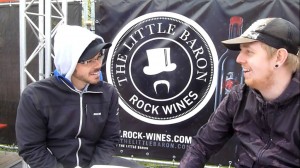 First of all congratulations with the bands 10th anniversary. It’s a great accomplishment! So to celebrate that, Scott (ex-front man) is touring with you this year. How is that going?

Thank You! It’s going amazing! We’re having so much fun and it’s just such a different dynamic for us. It is so nice to spend time with him again, especially for me cause I rarely see him. Just play all these old songs and feel young.

You inspired many bands in the Hardcore scene.  So we were wondering what inspires you guys?

I grew up listening to a lot of Punk Rock. Drumming-wise I was inspired by The Vandals and The Descendents.

As a band for Comeback Kid… Me, Andrew and Jeremy do the majority of the writing, we all have some sort of different taste but it all just comes together. If you wanna go down the Hardcore Road it’s definitely bands like Madball and Sick Of It All. Andrew’s favorite band of all time is Madball. On the other hand Jeremy is/used to be a metal head. He even had long black hair when he was 19 years old. Then he decided “ you know what? I’m going bald “ haha

You guys are working on a new album… What can we expect?

Right now we’re in the early stages and we’re having about four or five songs that we’re working on. It’s coming along pretty heavy but there’s definitely going to be some melody in there. I guess we never really know what we’re gonna come up with.

It kinda feels like we’re taking our last album “Symptoms And Cures” and we are progressing from that.  We were just really happy about that record and we felt that the broadcasting was like finding ourselves in this new line-up with Andrew singing. So we keep that in mind while working on our new record.

You have been touring a lot over the last ten years. Do you notice any difference between festivals in Europe and anywhere else?

Yeah, for example festivals in North America are NOWHERE NEAR this cool. I mean there’s a reason bands fly out here every year and do these festivals in Europe. It’s just a good time, lots of people come out to support you and it’s good for your band.

In North America there’s Warped Tour so it can be cool but sometimes you are up there on stage and no one actually gives a damn. When you come over here, everybody is so passionate and your hard work really pays off. That’s why bands keep coming back playing these festivals and they just keep getting bigger and bigger.

If I lived out here I would be at Groezrock every year with my tent in the fucking grass, partying with everybody because I think this is the BEST FESTIVAL EVER!

How are the long trips on the tour bus? Does anyone have any nasty habits?

No, not really… Well, I’m trying to quit smoking. Sorry mom! (my mom doesn’t even know I smoke) We have such a good vibe going on while touring and there is no negativity at all.

Are there any bands you want to see at Groezrock today?

Yes! We’ve done a couple of tours with Rise Against and they always sound amazing! So I really want to check them out tonight. I’d like to catch the A Wilhelm Scream set after these interviews. They are some of my best friends and always fun to watch.

So enough with the questions, let’s go and check out A Wilhelm Scream. Thank you for your time and have fun!